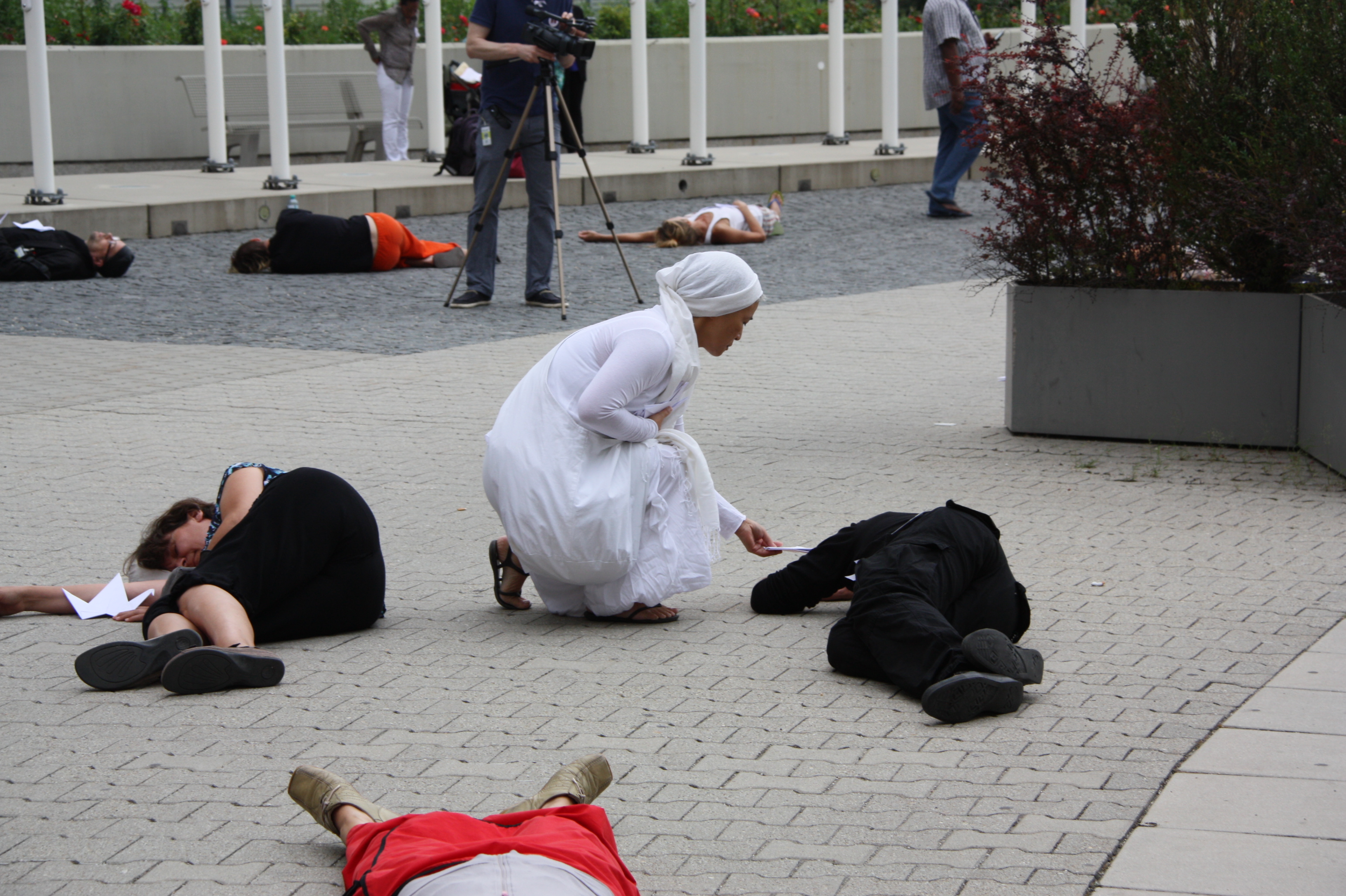 I am talking to you on this commemorative day as a physician. There is a special reason why we doctors call for a ban of all nuclear weapons and of all other weapons of mass destruction.
There is a longer medical tradition of raising our voices against criminal weapons of terror.
Shortly after the horrible acts of bombing Hiroshima and Nagasaki it was the outstanding French physician Dr. Albert Schweizer, who claimed for a prohibition of nuclear arms, later it was the Australian paediatrician Dr. Helen Caldicott and in 1980 Harvard Professor Bernard Lown and his Russian Colleague Academician Jewgenij Chasow founded the IPPNW.

Nuclear Weapons are weapons of mass destruction, capable to kill at once hundreds of thousands of people, as we have learned from Hiroshima, and nowadays even millions of people, most of them civilians, children, women. As Hans Blix, former head of IAEA stated in his famous report about Weapons of Mass Destruction to the United Nations: Nuclear Weapons are Weapons of Terror, no matter in which hands they are.

We know about the destructive effects of nuclear weapons, and as a physician I can certify that there is no special treatment, and even medical services will not work after a nuclear attack. Also therefore there is only one reasonable way to deal with this problem: it is prevention, and prevention in this case means abolition of these weapons.

To give you an idea about the destructive capacity, I invite you to follow this comparison:
The bomb of Hiroshima was a 20 kiloton bomb. The explosive power is indicated and specified in equivalents to the power of conventional explosives. So imagine I had 1 kg of a conventional explosive in my hands, like dynamite, enough to kill a whole auditorium of people. Now thousand times that quantity is a ton, thousand times a ton is a kiloton. Now imagine twenty times the kiloton and you have an idea of the Hiroshima bomb, called nicely “little boy” by the USA. And nuclear weapons are even worse than traditional ones, because besides the destruction by blast they produce heat, radioactive contamination and in case of nuclear war catastrophic natural destruction and famine. As the development of these weapons went on, now we have weapons of several megatons. Lear warheads, most of them in hands of USA and Russia, but as you now smaller numbers belonging to the three other official nuclear powers, China, France and Great Britain as well as to India, Pakistan and Israel, countries which are not members of the NPT.

We appreciate bilateral measures of reduction and limitations like SALT and START treaties, the creation of Nuclear weapon free zones in Latin America, Africa, Central Asia, Mongolia and Oceania through the treaties of Tlalteloco, Pelindaba, Rarotonga etc.

We all know that nuclear weapons are immoral. They are incompatible with human rights, very dangerous and expensive.
Their existence is of no help for anybody, they just destroy or threaten to destroy, endanger peace and create an atmosphere of fear. They are weapons of mass murder and genocide.
They can not be used to prevent from terrorism, but terrorists might acquire and use them, as long as these weapons exist. The idea nuclear weapons are useful deterrents, is not only of no use, it is dangerous, as it tries to justify and to prolong existence of weapons of mass destruction. And the longer nuclear weapons exist, the more like that one day they could be in hands of extremist terrorists.

I would also like to recognize and appreciate all the efforts of many outstanding personalities who dedicated a life for nuclear disarmament, Mexican Foreign Minister Robles, Mayor Akiba of Hiroshima, Canadian Senator Douglas Roche, Mongolian Ambassador Enkhsaikhan and many others.

However all their and our struggles have not yet reached the critical power necessary for a definite abolition of nuclear weapons. IPPNW together with IALANA and INES have presented this Model Nuclear Weapons Convention at the NPT Review Conference, and we know that a big majority of all nations support a ban of nuclear weapons, as well as the Nuclear Weapons Countries have committed themselves to complete nuclear disarmament according to article VI of NPT.

The Advisory Opinion of the International Court of Justice in 1996 was at least a partial success after four years of struggle of our NGOs.

During eight years, from 1988 to 1996, IPPNW had a strong campaign of protesting after each performance of nuclear tests. It was already the age of faxes and we were hundreds of physicians in many countries who received a fax with some data immediately after every nuclear test explosion in order to start sending medical prescriptions “Stop Nuclear Testing” like this one here (showing a recipe) to every respective Embassy. Finally, it was not in vain. With pleasure years later I received the invitation to the opening of CTBTO in Vienna, now already fifteen years.
All these are constructive developments and signs of hope. We have to follow this paht, to insist in disarmament till we have reached our goal. It is high time. It is for the future of our children.
Thank you for your attention.
.