My medical advice: Exchange your car for a bike! 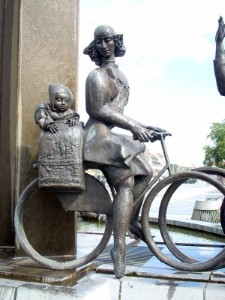 There are two important medical reasons why it makes sense to use bicycles:

1. It is good for our health, because of its preventive effects against cardiovascular, pulmonary , metabolic, joint- and muscle- and bone diseases (including osteoporosis) and even diseases of the nervous system as well as the  immune system. Even some kind of cancers seem to appear less frequently among cyclists, according to recent studies.

2. By using a bicycle instead of a car we can drastically reduce the production of green house gases, a major factor of climate change. In this way we can reduce the health risks resulting from climate change which affect mainly people in developing countries.

Former UN Secretary General Kofi Annan's special commission on climate change in June 2009 presented a study which stated that we have already got a loss of 300.000 persons per year due to climate change effects, mainly in developing countries. And this is at a level of 0,8 degrees increase of average temperature. We know that  an increase of 2,0 degrees is unavoidable, not to mention 3,0 or 4,0 degrees if we don't change our life style dramatically and immediately.