Presentation at the United Nations Office at Vienna, October 2009 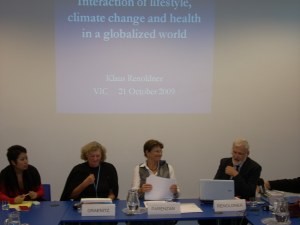 In his presentation, “The Interaction of Lifestyle, Climate Change and Health in a Globalized World”, Dr. Klaus Renoldner, a physician and an author of many publications on climate change and health, explained about sustainability and sustainable development.

The result of deforestation is not only the loss of fauna and flora and of its crucial function to convert CO2 into O2. Subsequently, deforested regions are often converted for agriculture such as for growing grains, which are food for cows, and sugar cane, which are used as agro-fuel for cars. This damages the carbon cycle as well as the water cycle – both essential for life on earth. Furthermore, we are having an additional GHG-problem due to massive methane-gases produced by cows, as a consequence of globally growing meat consumption.

Additionally, 80% of the augmentation of GHGs to a concentration of almost 389 ppm CO2 is due to the burning of oil, gas and coil. Therefore, we have no other choice but to reduce oil burning as fast as possible and switch over to sustainable energy sources.

Each year of waiting and doing "business as usual" – as Nicholas Stern quoted – postpones a possible solution for four to five years. The rationale behind this is that, we already produce GHGs five times more than the existing sinks (woods, mountains, and oceans) can reduce and convert to O2 in one year.

Renoldner also showed important figures, tables and statistics on GHGs' global trends and GHGs per capita productions in different countries. He also presented data from WHO on impacts on health, and data on impacts on development from other UN agencies. He illustrated various health risks and demonstrated evidence that show how people in developing countries – who are less responsible for the production of GHGs – are actually suffering the most (UNDP-report on Human Development 2007/2008).

We urgently need a very strict and globally binding climate agreement in Copenhagen. However, we also urgently need critical thinking, conscious, and changes in behaviour as expressed in the publication of UNEP, “CCCC Kick the Habit!”